Hi all! It’s time for another monthly status update.

Yesterday I’ve released wlroots 0.11.0 and Sway 1.5! This is a pretty big release, with lots of new features and bug fixes. New features include headless outputs that can be created on-the-fly (one use-case is remote VNC outputs). Sway now supports the Wayland IME infrastructure, for instance almost allowing CJK input to work. Adaptive synchronization (also known as Variable Refresh Rate) can be enabled on a per-output basis. A bunch of new protocols are now supported: viewporter for improved performance, keyboard-shortcuts-inhibit for better remoting and virtualization client support, and wlr-foreign-toplevel for third-party docks & window switchers. On top of all of these features, this release features a lot of DRM fixes (less black screens!) and input-related fixes (especially for touch and tablet devices). Resizing windows should also be more fluid.

In other Wayland news, a cool new feature has been added to mako. Markus Ongyerth has contributed multi-surface support. This allows to display groups of notifications in different locations on screen. For instance one could now display regular notifications on the top right corner and volume/brightness notifications in the middle of the screen.

I’ve started a new project, gamja. gamja is a web IRC client. It connects to a WebSocket server and just uses the IRC protocol on the wire, so it doesn’t depend on a specific IRC server. gamja relies on some bleeding-edge IRCv3 extensions to provide extra functionality – the user experience will be improved if a server that supports them is used, for instance soju. 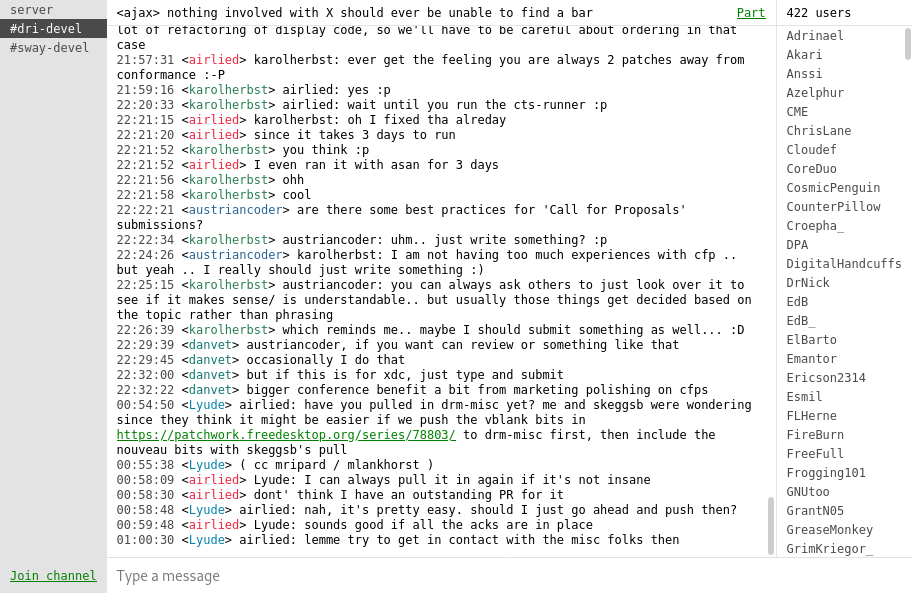 gamja supports basic operations you’d expect from an IRC client: joining channels, sending messages, chatting privately with users, and so on. It also features chathistory support: logs aren’t stored on the device, instead they are retrieved as needed. No more missing messages on connection loss!

My goal for gamja is to come up with a feature-rich and easy-to-use IRC client that can compete with other messaging platforms while still integrating well with the existing IRC ecosystem.

To wrap things up with yet a new project, let’s talk about tlsd. For a while I’ve been annoyed that it’s only possible to get Let’s Encrypt automatic TLS for a web server. Other services (like a mail server or an IRC server) can’t do the same because only the webserver can listen to ports 80 and 443. Since I’d really like to have zero-configuration TLS for these services as well, I’m trying to come up with a solution. This proposal includes a daemon responsible for retrieving TLS certificates and providing them to services running on the machine. The daemon could be standalone (ala CertBot/Lego) or could be bundled in the web server itself (ala Caddy). The key is to make the certificate retrieval protocol standard so that certificate daemons and services can inter-operate. I’m interested in feedback and ideas!

That’s all I have, see you next month!