Following last month’s wlroots release, we’ve started the Sway release candidate cycle. Kenny Levinsen and Ronan Pigott have helped fixing the bugs and regressions that popped up, and I hope we’ll be able to ship the final release next week. I also plan to release wlroots 0.16.1 with the fixes we’ve accumulated.

In other wlroots news, Manuel Stoeckl and I have continued to work on the Vulkan renderer. A lot more pixel formats are now supported for textures, and the buffer synchronization issues should all be sorted out. Next we’d like to add support for rendering to high bit depth buffers for color management purposes. This is a bit more involved since there is no shader stage which runs after blending, so I’d like to experiment with compute shaders to see if they’re better suited for us. That ties in with the renderer API redesign I’ve been planning for a while: the new rendering API should make it easier to use compute shaders, and already shows a nice perf boost for the Pixman renderer.

I’ve been debugging some issues with USB-C docks where outputs wouldn’t turn back on after a plug-unplug-replug cycle. The result is an i915 patch which fixes some of issues, but it seems there are more where that came from. Ultimately this class of bugs should get fixed when we add support for atomically turning off multiple outputs at once in wlroots, but this will require a lot more work.

Alexander Orzechowski and I have been pushing surface-invalidation, a new Wayland protocol to help with GPU resets. GPU resets destroy the whole GL/Vulkan state on the compositor side, so compositors which can recover from resets are left with nothing to draw. The protocol allows compositors to request a new buffer from clients.

New versions of swaybg, swayidle and slurp have been released. swaybg and swayidle now take advantage of new protocols such as single-pixel-buffer-v1 and ext-idle-notify-v1. slurp can now enforce a specific aspect ratio for the selection rectangle, has a configurable font, and can print relative coordinates in its format string.

I’ve merged some nice patches from delthas for the soju IRC bouncer. Alongside small quality-of-life improvements and fixes, a new WHO cache should make WHO queries more reliable, no longer hitting the rate limits of the upstream servers. Pending work on a database-backed message store will make chat history much more reliable, faster, and lossless (currently we drop all message tags). Last but not least, rj1 has implemented TLS certificate pinning to allow soju to connect to servers using self-signed certificates.

The Goguma IRC client for Android also has received some love this month. Various NOTICE and CTCP messages (e.g. from ChanServ or NickServ) should be less annoying, as they’re now treated as ephemeral. They don’t open notifications anymore, and if the user is not in a conversation with them the messages show up in a temporary bar at the bottom of the screen. I’ve also implemented image previews: 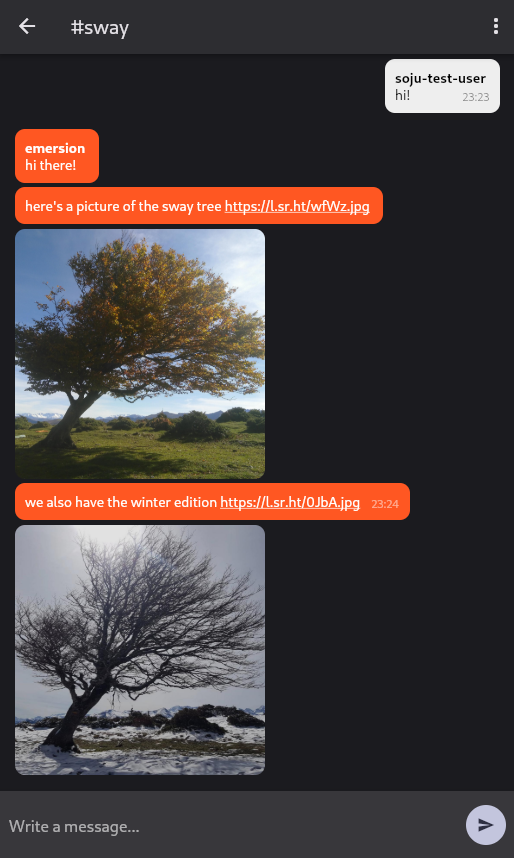 They are disabled by default because of privacy concerns, but can be enabled in the settings. Only image links are supported for now, but I plan to add HTML previews as well. Last, I’ve optimized the SQL queries run at startup, so launching the app should be a bit faster now.

The NPoTM is glhf, a dead simple IRC bot for GitLab projects. It’ll announce GitLab events in the IRC channel, and will expand links to issues and merge requests. We’re using it in #sway-devel, I’m pretty happy with it so far!

That’s all for now, see you in January!